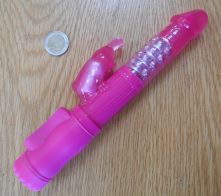 The Jessica Rabbit Slim is one of our more popular rabbits and according to the box seems to have it all so we decided to put it to the test.

First impressions are that for me it’s the right size, and for a beginner I’d suggest one of the slimmer style rabbits too which this fits into. If you prefer a larger rabbit then this probably might be a little small for you. 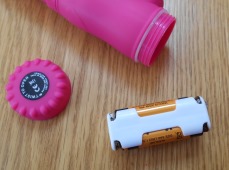 To operate the Slim is easy enough and quiet typical for a multi-functional rabbit if you’ve ever used one before. There are basically two separate functions the clit stim and the shaft.

To Start the rabbit shaped clitoris stimulator this press the on/off button in the middle of the controls. The button below it cycles through the 6 speeds. 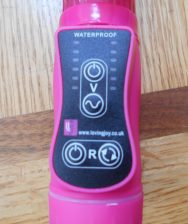 Obviously as the controls are totally separate the rabbit and shaft can be operated separately or alone what ever takes your fancy.

To switch either off you just press the on/off button. It really is that simple.

Now to the fun bit. If feels solidly built nothing innovative no amazing unique feature, but it has all the function of a modern rabbit, i.e. separate rabbit clitoris stimulator and shaft motors, dual controls, waterproof, totally skin-safe, rows of metal beads in the shaft and 6 speeds settings for the shaft and clit stim.

Second time out I'm ready. It is quiet, not the quietest on the market but definitely quieter than any of the larger models. Noise is always a trade-off with power and size and the Jessica Rabbit Slim is definitely in the more discreet rabbit section.