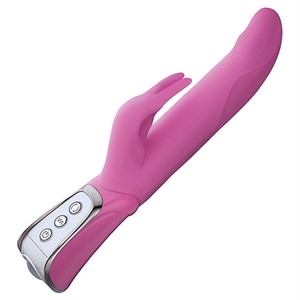 Think vibrators are only for single women? Think again.

If you’re a rabbit virgin the best advice I’ll give you is something most men will tell you, bigger is not always better. You need to choose a size that will allow you to be comfortable and enjoy the sensations and experience. The controls on most rabbits are usually very similar with separate controls for the rabbit ears and for the shaft. Most have a range of speeds and vibrations but can simply be controlled by cycling through the different settings with an up and down button.

Using the ears experiment with the different speeds and settings, this will also help arouse you and get you ready for penetration. When you’re ready you can slowly insert the shaft again with a generous squirt of lube.

When fully inserted the rabbits ears should sit snugly on the clitoris now turn on the shaft which also has multiple speeds. It will rotate and there are even some that thrust. You can adjust the speeds to find the perfect vibration to suit your mood. Now the combination of rotating vibrations on your g-spot with the tingling vibration of the rabbit ears on your clitoris should work its magic.

Designed primarily as a sole play toy rabbits can also be used during foreplay. Let your imagine run and make sure to include your partner, most will be more than happy to let your little rabbit out to play!